Dancing in the moonlight with Tsukiyoi

For many "gaijin" like me who have fallen under the spell of Japan, a big part of the attraction is the mish-mash of cutting-edge modernity and quaint tradition. Like spotting a kimono-clad lady in a subway train, or an ancient temple standing in the shadow of a gleaming skyscraper.


The aural equivalent of this can be heard in the music of “Tsukiyoi”, a duo who combine traditional Japanese sounds with contemporary electronic beats to create a thrilling and enchanting blend that is all their own. "Tsukiyoi" literally means "intoxicated by the moon", which reflects the often other-worldly vibe of the music. The pair’s traditional half is represented by Kou, a petite young lady with a mighty voice whose chosen instrument is the koto, similar to a harp but with fewer strings and played on its side rather than upright. Bespectacled DJ and music producer Tetsu is the Yin to Kou’s Yang, adding his brand of infectious house grooves to the mixture, in a way that perfectly complements the soulful vocals and emotive koto strings. 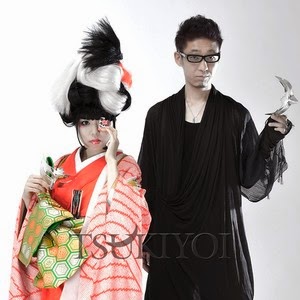 Kou and Tetsu got together in 2011, and their first release, “Rokudan”, was a modern instrumental arrangement of a 400-year-old koto piece. Perfect as background music for getting a massage or meditating, it was nevertheless unlikely to trouble the charts or dance floors of Tokyo. The following year, however, saw the duo expand their sound, raising the tempo and slipping in Kou’s powerful vocals on the hypnotic “Yougao”, supposedly named after a character from the ancient Japanese novel “The Tale of Genji”. Listening to the duo’s subsequent releases, from the exquisitely languid “Lovers” to the uplifting “Origin”, it’s clear that they are becoming gradually less reliant on the traditional/modern angle as their confidence grows along with their fan base. For example, while the koto remains a key element of many tracks, it doesn’t always feature. Kou has other tricks up her billowing kimono sleeve, not least her haunting, ethereal voice, which is perhaps showcased most impressively on “Lovers”. Her singing on this track has an almost timeless quality, transporting the listener to a mystical place. It starts off fairly soothingly but gradually builds to a rousing climax, along a wave of synth sound.


The duo are clearly influenced not only by traditional Japanese music but by Western dance and pop music. One of their more recent songs, "Samsara", even borrows from the back catalogue of the King of Pop himself, Michael Jackson, using the melody from his 1983 hit "Human Nature", which was later ripped off by the 90s girl group SWV. Personally, I much prefer this koto version! See what you think...


If you live in Japan, there should be plenty of chances to see Tsukiyoi in person over the coming months, as they're starting to tour more frequently, often to sold-out, though small, venues. Fans in Europe shouldn't feel left out either, as Tsukiyoi will be performing at the "Japan Expo" in Paris in July. It remains to be seen whether Kou and Testsu will achieve proper fame, at home or abroad, but in this music fan's humble opinion they're the ideal ambassadors for Japan's music scene, demonstrating great pride for their country's culture while absorbing all kinds of overseas influences, one thing that Japan has excelled at over the years.

Check out more information on Tsukiyoi at their official site: tsukiyoi.com
Posted by David Vickers at 12:17 AM